As that exclamation point would entail, I was extremely excited to try dragonfruit. I’ve heard of it, I’ve seen how beautiful it is, and I’ve seen people use it to make really unique looking dishes on Pinterest.

I picked one up at (my favorite!) Dekalb Farmer’s Market, and honestly didn’t have big plans for what I was going to do with it. I figured I’d taste it, love it, and then maybe make some smoothies or something with it. I planned to go back for more to eventually think of something more fun to make with it later.

My friend Jessie was going to be coming to visit, and I figured she’d be game to try it with me. We were planning on making a big fruit salad to take over to a pool gathering at another friend’s house and were pretty excited to add this exotic looking fruit into our fruit salad. I had visions of it being this great talking point for what would’ve typically been a very ordinary fruit salad.

After the first few balls were scooped out, Jessie and I sampled the goods. Drumroll please………… we didn’t like it. 😦 I had read somewhere that dragonfruit has a flavor between a pear and an apple, and whoever said that is not reputable. The best way we could describe it was that it was “earthy”.  Jessie even said that it reminded her of beets. Not at all what I would’ve expected a fruit to taste like.

I pressed onward through my disappointment and decided to just add it to the fruit salad, and see what other people’s opinions were when they tried it. Everyone was pretty much on the same page.

I took to the internet to google the difference between the white flesh and red flesh variety. There are claims that the red flesh version is sweeter; I’m planning to acquire one and give it a shot!

Update: It took me a few weeks, but I finally got my hands on some red dragonfruit. I’ll be honest, it is better than the white dragonfruit, but that’s not saying much. It’s still very bland and earthy, which is a real bummer considering how beautiful it is. I really expected a flavor explosion from something so magnificent looking.

To put it to good use, I made dragonfruit, kale, and mixed berry smoothies. And that, my friends, was great! They had a beautiful deep red color and pretty much just tasted like berries. I think that the smoothie just took on the flavor of the additional fruits I added to it. I would imagine if you just used dragonfruit, it may not be very flavorful. I used 1 dragon fruit, a big handful of kale, and 1 cup of frozen mixed berries, a little water, and a splash of orange juice. A wonderful way to take in all those phytonutrients found in the dragonfruit!

Do you like dragonfruit? I would love for you to share your opinions and recipes with me! 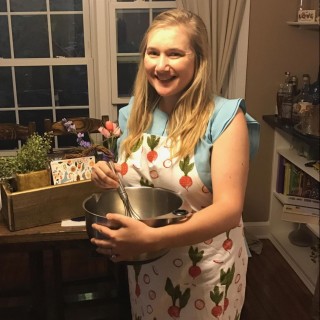 If you have a suggestion for a recipe, ingredient, or skill you think I need to master, please...let me know! Click on the contact link above!